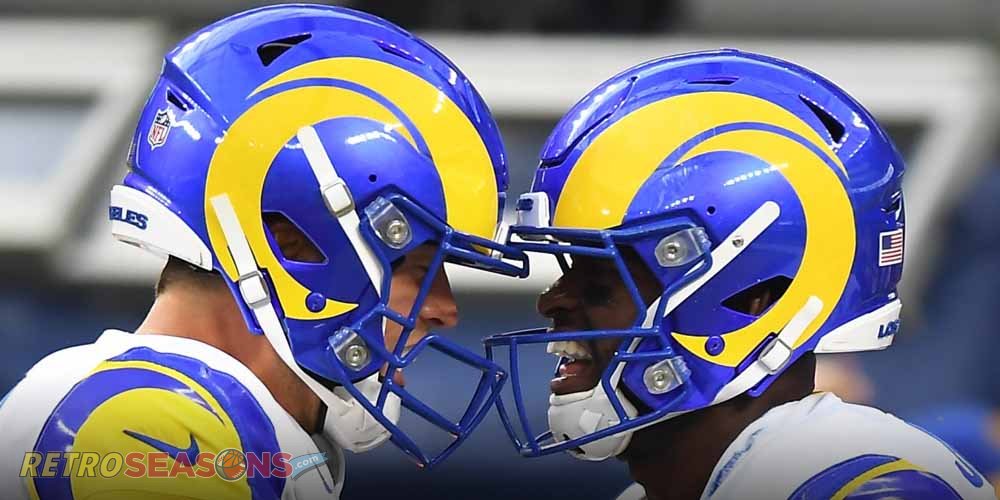 The 2021 NFL season recap is now available on RetroSeasons. Congrats to Matt Stafford and the Los Angeles Rams for winning Super Bowl LVI, on their home field at SoFi Stadium no less! The 2021 NFL season was full of ups and downs, including the passing of Hall of Fame Coach and Broadcaster John Madden.

Scouts considered the draft to be lacking desirable prospects due to the COVID-19 pandemic shortening the 2020 college football season. The NCAA granted an extra year of eligibility for athletes because of the shortened season. This resulted in many prospects returning to school instead of declaring for the draft.

Other significant rule changes include:

Notable Retirements and Deaths in 2021

Training camps were held from late July through August with the Pro Football Hall of Fame Game being played on August 5, as Pittsburgh defeated Dallas. The two teams were previously scheduled to play the 2020 game before it was canceled due to the COVID-19 pandemic.

The 2021 NFL Season recap begins with the regular season. The season was the first to feature a 17-game regular-season schedule as the league expanded the season from 16 games. The season was played over an 18-week schedule beginning on September 9, with each of the league’s 32 teams playing 17 games, with one bye week for each team. The regular season concluded on January 9, 2022; all games during the final weekend were intra-division games, as it has been since 2010.

The added game is a fifth interconference matchup between divisions that had played each other two years earlier, based on the position in their respective divisions the previous season (e.g. the team that finished fourth in its division plays a club that finished fourth in a division of the other conference). AFC teams host the extra game in odd-numbered years, including 2021, with NFC teams getting the extra home game in even-numbered years.

This was the first time that the league featured a 17-game regular-season schedule. Consequently, the start of the playoffs was pushed a week later to January 15, 2022. The postseason concluded with Super Bowl LVI on February 13 at SoFi Stadium in Inglewood, California. The NFC’s fourth seed, the Los Angeles Rams, defeated the AFC’s fourth seed, the Cincinnati Bengals.

Green Bay Packers quarterback Aaron Rodgers was awarded the NFL’s MVP for the second year in a row and the fourth time in his career. Rodgers led the Packers to the NFC’s number one seed, throwing for 4,115 yards and 37 touchdowns with just four interceptions in 16 games this season.

Los Angeles Rams wide receiver Cooper Kupp was named the NFL Offensive Player of the Year. Kupp claimed the triple crown during the 2021 season, leading the league in receptions (145), yards (1,947), and touchdowns (16). He also played a vital role in the Rams’ road to the Super Bowl, making 11 catches for 142 yards and two TDs in the NFC Championship game against the San Francisco 49ers.

Pittsburgh Steelers outside linebacker T.J. Watt was crowned with the NFL Defensive Player of the Year award. Watt recorded 22.5 sacks in 2021 and tied the NFL record set by Michael Strahan with the New York Giants in 2001.

Changes to Broadcast Media for the NFL 2021 Season and Beyond

This is the eighth year under the current nine-year broadcast contracts with CBS, Fox, and NBC; and the eighth and final year under the current contract with ESPN. This includes “cross-flexing” (switching) Sunday afternoon games between CBS and Fox before or during the season, regardless of the conference of the visiting team. NBC airs Sunday Night Football, the Kickoff Game, and one Thanksgiving game. ESPN’s rights to Monday Night Football were modified this season, allowing ABC to simulcast select games (Weeks 1, 14, and 15), as well as a new Saturday doubleheader in Week 18. Thursday Night Football aired on NFL Network, with Fox, Twitch, and Prime Video, which simulcasted 11 games (weeks 5–15, excluding Thanksgiving, plus a Week 16 Saturday 4:30 pm Christmas game). This was the final season of the TNF contract with Fox and NFL Network.

NBC televised Super Bowl LVI. CBS was originally scheduled to broadcast the game under the current rotation. However, CBS traded the game to NBC in exchange for Super Bowl LV. Super Bowl LVI falls during the 2022 Winter Olympics, the first to be scheduled during an ongoing Olympic Games. NBC also holds the U.S. broadcast rights to the Olympics. Due to NBC’s coverage of the 2020 Summer Olympics, the network sold its broadcast rights to the Pro Football Hall of Fame Game to Fox.

Future Deals and Even More Manning

On March 18, the NFL announced its future television deals for 2023–2033, which will see CBS, Fox, and NBC maintain their existing Sunday packages with expanded digital rights for their streaming services. Thursday Night Football will move exclusively to Amazon and Twitch. ESPN also entered into a new agreement for Monday Night Football for 2022, adding the aforementioned Week 18 Saturday doubleheader beginning this season. Fox and NFL Network in May that it opted out of its final season of Thursday Night Football. As a result, Amazon will take over TNF starting next season.

For the second consecutive season, Nickelodeon will simulcast a wild-card playoff game with CBS. The youth-friendly broadcast modifications debuted in 2020. Nickelodeon will also air a weekly NFL magazine program, NFL Slimetime, throughout the season.