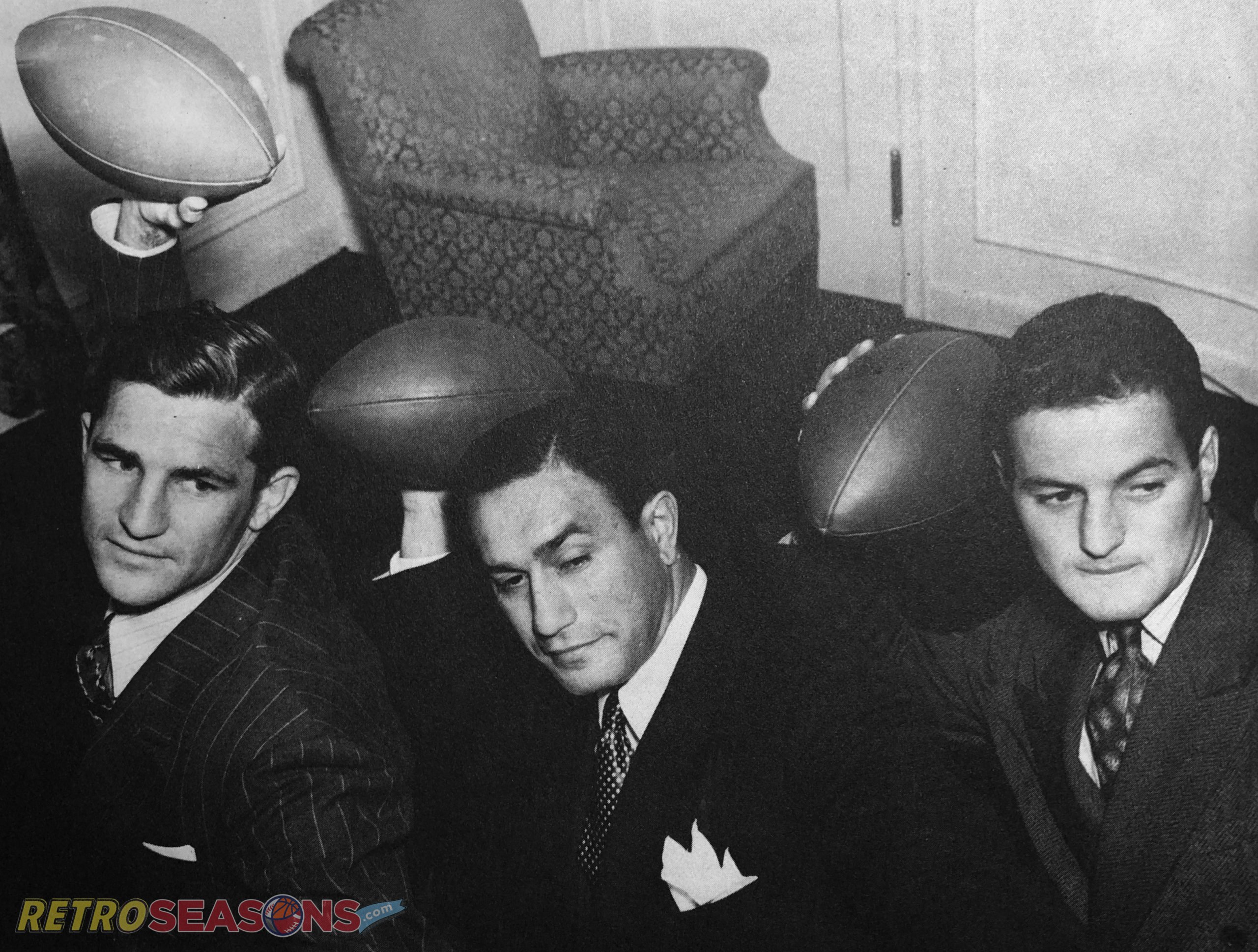 As the NFL migrated towards forward-pass oriented offenses in the 1930s and 1940s, Benny Friedman, Sid Luckman, and Sammy Baugh defined the new role of the passing quarterback.

Benny Friedman played college football as a halfback and quarterback for the University of Michigan Wolverines from 1924 to 1926. Friedman played in the backfield on both offense and defense, handled kicking and return duties, and was known for his passing game. He was a consensus first-team All-American in both 1925 and 1926, and won the Chicago Tribune Silver Football trophy as the most valuable player in the Big Ten Conference in 1926.

In August 1927, Friedman announced that he would play professional football for the Cleveland Bulldogs in the National Football League (NFL). During the 1927 season, Friedman started all 13 games at quarterback and led Cleveland to an 8–4–1 record. Cleveland had the top scoring offense in the league with an average of 16.1 points per game. In his first NFL game, he threw a 50-yard touchdown pass to Al Bloodgood. He led the NFL during the 1927 with 12 passing touchdowns and 1,721+ passing yards; his closest competitors totaled seven passing touchdowns and 1,362 passing yards.

In his eight seasons in the NFL, statistics are incomplete, but he appeared in 81 games, compiled at least 5,326 passing yards, and had 66 touchdown passes and 51 passes intercepted. He was the NFL’s career leader in passing yardage until Sammy Baugh’s seventh NFL season in 1947. Friedman also totaled over 1,000 yards rushing and over 400 yards on punt returns. At the time of his retirement, Friedman also held the NFL record with 66 career touchdown passes.

Sammy Baugh attended Texas Christian University. While at Texas Christian, he threw 587 passes in his three varsity seasons for 39 touchdowns. Baugh was named an All-American in 1935 and 1936.  He finished fourth in voting for the Heisman Trophy in 1936

As expected, Baugh was drafted in the first round (sixth overall) of the 1937 NFL Draft by the Washington Redskins, the same year the team moved from Boston. He signed a one-year contract with the Redskins and received $8,000, making him the highest-paid player on the team.

During his rookie season in 1937, Baugh played quarterback, defensive back, and punter, set an NFL record for completions with 91 in 218 attempts and threw for a league-high 1,127 yards on their way to the NFL Championship.

Primarily known for his passing prowess, Baugh led the league in completion percentage a record eight times, passing yards four times, and three times in passer rating, among other statistics. However, he was also known for his versatility—having the ability to play at a high level as a punter as well as a defensive back

Hearing of Sid Luckman’s exploits as a single-wing tailback at Columbia University, Chicago Bears owner and coach George Halas believed Luckman had the ability to become an effective T-formation quarterback, and traveled to New York to watch him play. Halas then convinced the Pittsburgh Pirates (later the Steelers) to draft Luckman second overall and then trade him to the Bears, because he was interested in using Luckman’s skills to help him restructure the offensive side of the game. Upon starting with Halas, Luckman mastered an offense that revolutionized football and became the basis of most modern professional offenses.

In 1940, during his second season with the Bears, Luckman took over the offense and led the Bears to the title game against Sammy Baugh and the Washington Redskins. The Redskins had beaten the Bears, 7–3, during the regular season. Using the “man-in-motion” innovation to great advantage, the Bears destroyed the Redskins, 73–0, stated to be “the most one-sided game in the history of the sport”.

In 1943, Luckman completed 110 of 202 passes for 2194 yards and 28 touchdowns. His 13.9% touchdown rate that year is the best ever in a single-season, while his 10.9 yards per attempt is second all-time. During one game that year, Luckman threw for 443 yards and seven touchdowns, still tied for the most passing touchdowns in one game; it was also the first 400-yard passing game in NFL history.