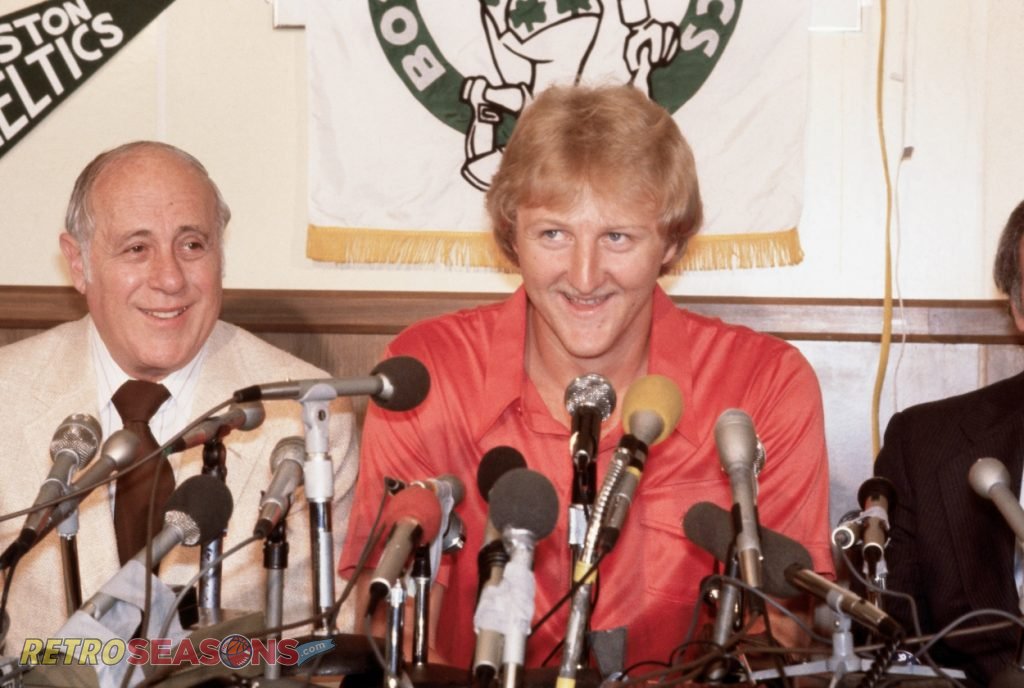 Larry Bird was drafted by the Boston Celtics with the sixth overall pick in the 1978 NBA draft. He did not sign with the Celtics immediately; instead, he played out his final season at Indiana State and led the Sycamores to the NCAA title game. Celtics General Manager Red Auerbach publicly stated that he would not pay Bird more than any Celtic on the current roster. Bird’s agent Bob Woolf told Auerbach that Bird would reject any sub-market offers and simply enter the 1979 draft instead. Boston’s rights would expire when the draft began on June 25, and Bird would have been the likely top pick.

After protracted negotiations, Bird inked a five-year, $3.25 million contract with the team on June 8, making him the highest-paid rookie in sports history.  Shortly afterward, NBA draft eligibility rules were changed to prevent teams from drafting players before they were ready to sign, a rule known as the Bird Collegiate Rule.

Before the draft, Larry Bird had just finished his junior year at Indiana State. However, he was eligible to be drafted without applying for “hardship” because his original college class at Indiana University had graduated. He initially enrolled at Indiana University in 1974 but dropped out before the season began. After sitting out a year, Bird enrolled at Indiana State. Despite being eligible for the draft, he stated that he would return to college for his senior season.

His hometown team, the Indiana Pacers, initially held the first overall pick. However, when they failed to persuade him to leave college early, they traded the first pick to the Portland Trail Blazers. The Blazers also failed to convince him into signing. Five teams, including the Pacers who held the third pick, passed on Bird until the Celtics used the sixth pick to draft him. They drafted him even though they knew that they might lose the exclusive rights to him if he didn’t sign before the next draft. He could reenter the draft in 1979 and sign with the other team that drafted him. In negotiations with Red Auerbach, Bird’s agent Bob Woolf bluntly dismissed Red’s lowball salary offers. He said that he would not offer Bird a contract that paid him more than the $400,000 annual salary of the team’s highest-paid player at the time, Dave Cowens. Woolf made it clear that Bird would enter the 1979 Draft without any regrets if Boston didn’t change its plans.