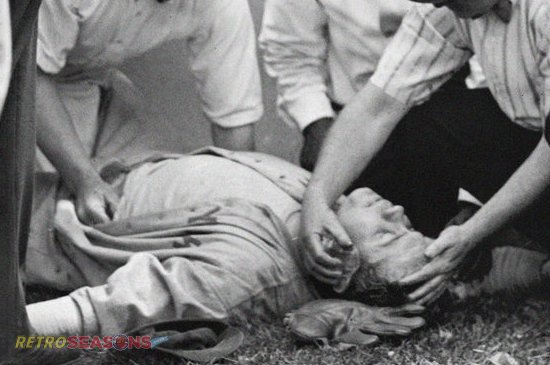 New York Yankees right fielder Babe Ruth was knocked unconscious after he ran into a concrete wall at Griffith Stadium, Washington, D.C.. while trying to catch a foul ball on July 5, 1924. As he laid unconscious on the field, the Yankees’ trainer, Doc Woods, rushed to him with a first-aid kit and poured icy water onto his face.

Ruth was knocked out for five minutes. When the Babe finally opened his eyes, the Yankees’ manager, Miller Huggins, offered to take him out, but Ruth would not hear of it. Ruth went back into the game, showing a limp from damaging his left hip. The remainder of the game he recorded two more hits, drawing louder cheers than usual for his fortitude. He even played the second game of the doubleheader.

The New York Times described it the next day as:

Ruth’s 1924 season was one of the best ever. Leading the league in HR’s and batting average, he just missed out on the triple crown in no thanks to Goose Goslin’s 129 RBIs for the Washington Senators

Tweets by Yankees
Go to Top